Marshall Road Elementary School opened on September 5, 1961. Robert F. Jarecke was our school’s first principal, serving from 1961 through the winter of 1965.

On September 6, 1961, the Washington Post published an article describing the opening of Marshall Road through the eyes of a first grader, Lynne Goldsborough:

Within a few hours, she had found her new school, had taken her seat, had been stung by a bee and had decided that kindergarten was more fun than first grade. But she didn’t cry once. Not even when other door-knob high first-graders about her were beginning to sniffle at the thought of making it alone down the long pink corridor of Fairfax County’s new Marshall Road Elementary School to their classrooms. Marshall Road is a new school and, like most new schools, was not quite ready on opening day. The clocks were running, to be sure, but the shades are still to be hung, textbooks have reached the school but not all the classrooms, and the morning Pledge of Allegiance was said to an imaginary flag. But all in all, ‘things went very well,’ said Principal Robert Jarecke, who is beginning his first job as principal. All the school’s 600 or so students were in their places by 9:05 a.m., just 20 minutes after starting time, and many teachers had their classes working by mid-morning.

Marshall Road Elementary School opened during the post-World War II period known as the baby boom. In September 1960, there were 59,870 children enrolled in Fairfax County Public Schools (FCPS). By December 1967, that number would climb to 107,000. During this time period, the United States Congress appropriated financial aid to school districts impacted by the growth of the federal government workforce. The construction of Marshall Road was partially funded by a Federal Impact Grant, and partially by school bonds. Our school originally had 20 classrooms. It was designed by the architecture firm of Pickett & Siess, and built by the Eugene N. Hooper Company at a cost of $408,150.

During the early years, Marshall Road had 21 classroom teachers, one librarian, and approximately 600 students. When our school opened in 1961, students were excited to find that the cafeteria served hot lunches daily - a service that was somewhat unique even during that era in Fairfax County schools. The first meeting of our P.T.A. was held on September 13, 1961. During the summer months, our school library was open to local children twice a week for recreational and refresher reading. Principal Robert Jarecke was succeeded in February 1965 by Ralph C. Voight, a former 5th and 6th grade teacher and assistant principal at North Springfield Elementary.

Mr. Jarecke was very interested in the United States’ role in space exploration in the 1960s. A television was set up in the cafeteria for the classes to watch John Glenn’s orbit (on February 20, 1962 in Friendship 7). We also watched other take-offs when they occurred. ~Dottie Gabig

From the founding of FCPS in 1870 until the early 1960s, public schools in Fairfax County were segregated by race. Marshall Road was built to serve the rapidly expanding white suburban communities near Vienna. At that time, the few African-American children living in our area were bused to Louise Archer Elementary School, then an all-African-American school in Vienna. In the early 1960s, FCPS began a slow process of desegregation. African-American families who were interested in having their children attend a school nearer their home had to apply for pupil placement in previously all-white school buildings. In 1963, the first African-American children were admitted to Marshall Road: Nancy, Steven, and Susan Shoemaker. It wasn’t until the end of the 1965-66 school year that all Fairfax County public schools racially integrated, marking the beginning of the racially and culturally diverse school system we know today.

In 1968, the Fairfax County School Board decided to enlarge Marshall Road Elementary School to house 780 students. The first addition to our school was constructed from 1968 to 1969 by the Tannon Construction Corporation. Our principal during this time was Paul C. Kelley. He was succeeded in 1970 by our fourth principal, Thelma K. Grogan, who had formerly served as the principal of Edsall Park Elementary School.

During Grogan’s time at Marshall Road, student enrollment at our school slowly declined, from 483 in 1975 to 382 in 1980. As the 1970s drew to a close, and the last children of the baby boom graduated high school, student enrollment in eastern Fairfax County was in steep decline necessitating the closing of several schools. Marshall Road was one of five schools in Vienna that was studied for closure. The others were Cedar Lane, Cunningham Park, Louise Archer, and Vienna elementary schools. Following completion of the study, the Fairfax County School Board voted to close Cedar Lane Elementary School at the completion of the 1980-81 school year.

In 1978, Virgal H. Duffell was appointed principal of Marshall Road Elementary School. He took a brief leave of absence in the spring of 1981 to complete his doctoral degree, and Alan E. Leis served as acting principal from March to June of that year.

By the late 1960s, FCPS had grown so large organizationally that a plan was put in place to decentralize the school system administration into four school areas, each overseen by an assistant superintendent similar to the “region” structure in use today. As early as 1977, Marshall Road Elementary School housed the offices of Area III. 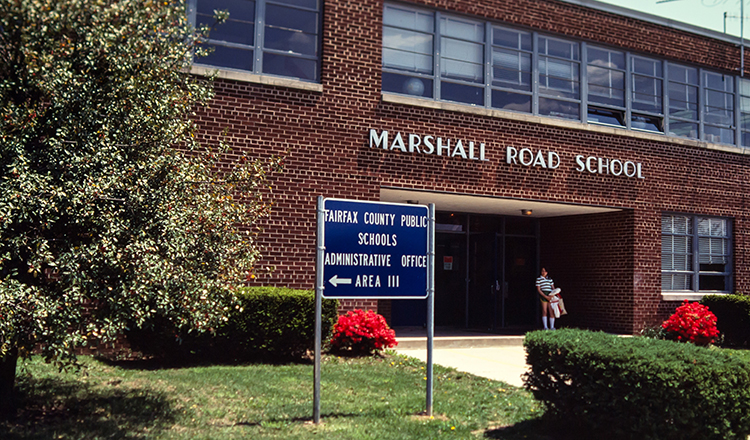 Marshall Road continued to house the Area III offices during the 1980s, and by 1986 fourteen classrooms had been converted into office space. Pictured below is classroom 103 in the mid-1960s. Of the nine classrooms originally in the front hallway, only room 103 was not converted into an office. 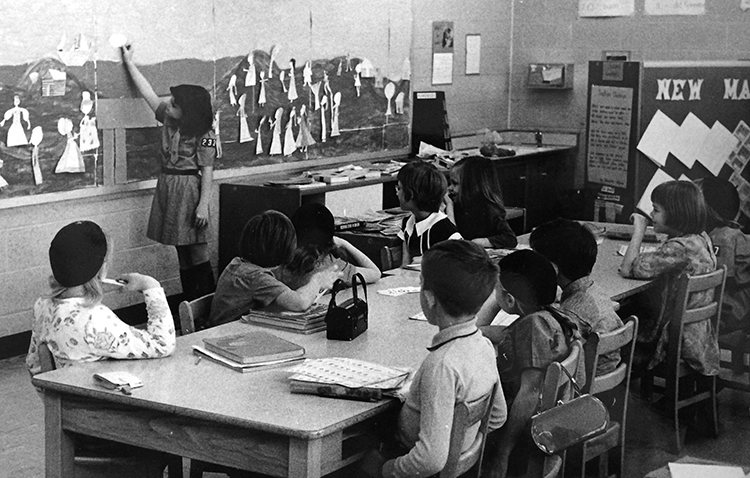 In 1984, FCPS administrators reported to the School Board that there was an unexpected turnaround happening in kindergarten enrollment in the Vienna area. The report stated that birth rates were on the rise again and estimated that within five years the kindergarten enrollment at Vienna area schools would increase from 3,700 to more than 4,450. The first children of the Millennial Generation were poised to enter FCPS. The opening of the Vienna Metro station in June 1986 was another catalyst for population growth, bringing more families with young children to Vienna. According to Principal David Meadows, the entire student body of Marshall Road Elementary School was the first group, besides Metro employees, to be given a ride on the new Metro line. The children traveled from Vienna to the Court House station in Arlington, where they boarded another train for the return trip. The students were also invited to the ribbon cutting ceremony at the Vienna / Fairfax-GMU station.

Marshall Road experienced several significant changes in the 1990s. At the start of the decade, the Area III offices vacated the building, and the School Board voted to house a special education center for students with emotional disabilities in our school. Marshall Road Center opened in 1991 with an initial enrollment of 40 children, and operated independently with its own classrooms for art, music therapy, and adaptive physical education. The center also had a separate staff of teachers supported by a counselor, a psychologist, a social worker, and a school principal. The first principal of Marshall Road Center was John Marston. Marston was nominated for The Washington Post Principal of the Year Award in 1991.

In May 2000, the Fairfax County School Board passed a resolution dedicating our school’s library-media center in honor of Principal David Meadows. The following school year, Mr. Meadows was succeeded by our eighth principal, Judith Isaacson. During Isaacson's principalship, the Marshall Road Center principal position was discontinued. Today, the functions of that role are the responsibility of an assistant principal.

What's in a Name?

Have you ever wondered about the origin of the name "Marshall" in Marshall Road? Who was Marshall? Learn the answer in this video produced for Fairfax County Public Schools’ cable television channel Red Apple 21.